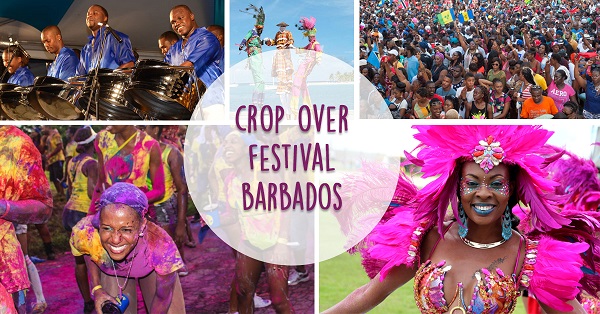 Held throughout July and ending in Grand Kadooment Day parade on the first Monday in August, the Crop Over carnival involves a wide variety of entertainment and celebrations that brings thousands of tourists to the island each year.

In the lead up to the Grand Kadooment Day finale parade, the festival features numerous calypso and soca music competitions amongst other events and cultural activities, all of which have historical ties back to the original African slaves.

The slaves invented the Crop Over custom by their celebrations of the end of the hard sugar cane harvest.

Crop Over is the most significant cultural festival of Barbados and signifies the end of the once dominant sugar cane crop harvest. The party carnival involves a wide variety of entertainment and celebrations that brings thousands of tourists to the island each year.

This massive street parade brings both local and international revelers to ‘jump up’ in extravagant costumes all the way from Warrens in St. Michael to the Spring Garden Highway, where the party continues to the early hours of the morning. And, the best part is, anyone can join in the festivities, so it’s a definite ‘must do’ while you’re in Barbados.

In the lead up to the parade, the festival features numerous calypso and soca music competitions, among other cultural activities. For many Barbadians living overseas, the months of July and August are the most popular to return home, to coincide with all of the Crop Over fun and frivolity.